Some quick thoughts on a 16-14 Bears win over the Denver Broncos:

It was the second straight defensive battle for the Bears to start the year. The offense struggled to really get anything going all day except for one touchdown drive in the second half which included a big 46 yard run by Cordarrelle Patterson. The defense was stout for most of the day but just failed to come up with a key stop late in the game. Denver seemed to come up with the biggest play of the game when they scored on a late TD to Emanuel Sanders and then converted a two-point conversion in a one point game to take a one point lead with 31 seconds left.

Luckily the offense, and Eddy Piñeiro, were there to bail the defense out after struggling mightily last week. Trubisky got the ball to the 36 yard line after a roughing the passer and a 25 yard pass to Allen Robinson with one second left. This left Piñeiro with just enough time to kick a 53-yard field goal as time expired to give the Bears a 16-14 win.

If I told you this offseason that a Chicago Bear kicker was ever gonna be the player of the game would you have believed me? Well Piñeiro was just that for this Bears team. He was perfect on all three of his field goal attempts including two of 50-plus yards one of which was obviously the game-winner as time expired.

After an offseason filled with questions about the kicker, Piñeiro was a major factor in the Bears win over the Broncos. The excitement was palpable for a young kicker who worked extremely hard to be in the position he was in today. Looks like the Bears have found their kicker!

That was Denver’s record in weeks 1 and 2 at home prior to the Bears win today. Additionally, Denver had not lost at home during the first two weeks of the regular season since a 23-20 loss to Oakland in 2011, a streak of 12 games. Regardless of how ugly the win was it is not easy to go to the altitude and win early in the season. This game was very reminiscent of the Miami Dolphins game after the bye week last year when the heat really seemed to affect the defense, the big difference was the Bears’ kicker making the 53-yard field goal to win the game. Towards the end of the 4th quarter the defense looked gassed partly because the offense could not sustain drives and keep them off the field.

Joe Flacco took advantage of this with short passes negating the pass rush of the defense while feasting on corners who were playing soft in coverage. Fortunately, Trubisky did just enough with a 6 play, 40 yard drive setting up the Piñeiro game-winner. While it was not pretty by any means, 22-1 over a 19 year period is no fluke and the Bears coming out of Denver with a win is impressive no matter how it happened.

Check out this week’s postgame show for complete game coverage … 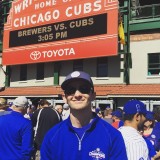