For the last 253 days, everything having to do with a field goal haunted Chicago Bears fans. It didn’t matter that the Bears went 12-4 and made the playoffs for the first time in eight years; they were haunted by the double doink.

After hitting his first two field goals of the game, Pineiro had a chance to free the Bears of all their kicking demons, and he wanted the chance.

He was “praying for it” according to his postgame press conference, and he capitalized, knocking a 53-yard field goal down like it was an extra point.

There was a lot of drama surrounding the special teams unit all offseason, and the Bears can confidently say they have found their kicker.

What led up to that kick needs to be discussed in my second takeaway of the game.

Trubisky had another week to forget statistics wise, but thanks to a generous roughing the passer penalty on their game-winning drive, he had an opportunity to put his team in a position to win, just like in the wildcard last year.

Unlike that game, this kick would actually go through the uprights.

In what might have been the best play of his career, Trubisky evaded a vicious pass rush from the Denver Broncos, didn’t scramble for yards out of pure panic, and delivered a perfect ball to Allen Robinson for a first down and had the awareness to call a timeout without a second to spare.

Robinson was wide open so it wasn’t the throw itself that was impressive, it was his ability to avoid the sack, which would have caused Bears fans to overreact and call for Chase Daniel to take over moving forward.

He composed himself and delivered a bullet, and hopefully, this can a turning point in the season for him and this offense.

3. Progress for the Offensive Line

While the offense itself had another slow game, the offensive line looked like they’re figuring it out as they held the Broncos’ defense, led by Bradley Chubb and Von Miller, without a sack.

This allowed the Bears to establish a solid rushing performance, as they were able to gain 153 yards on the ground. The passing game is still a work in progress, but the excellent play from the defensive backs of the Broncos prevented a couple of breakout plays from taking place.

Look for the Bears to get moving in a more positive direction against a Washington team that gave up three passing touchdowns to Dak Prescott on Sunday.

4. The Defense Looked Great … But

The defense looked great again, but if there is a complaint, it’s how they perform when they have a lead.

When they’re playing from behind, the defensive backs are playing up on receivers, pressure is being applied everywhere and the offense has minimal success.

The moment the Bears went up by ten points, they switched to what looked like more of a “bend, don’t break” defense, which is puzzling when you have players as skilled as the Bears.

This is common as they don’t want to give up a big play, but defensive coordinator Chuck Pagano should have more faith in his unit moving forward.

The offense needs to run through David Montgomery. Plain and simple.

18 carries for 62 yards isn’t anything to write home about, but when he gets going, this offense does too.

He’s the “you go, we go” guy for the 2019 Chicago Bears. When he’s given the ball the majority of a drive, it rarely seems to be a three-and-out.

The front seven needs to stay focused on him, which allows receivers to get open through play-action, which we all know Trubisky excels at.

Nothing against the other backs, but Montgomery deserves to be the focal point of this offense moving forward. 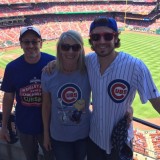 Mark Talarico is a writer for The Chicago Audible. He graduated from Arkansas State University, where he ran cross country and track for four years, in May 2017 with a Bachelors degree in Special Education. He is currently a resource math teacher at Jonesboro High School. His favorite Chicago Bear memory would have to be meeting Brian Urlacher in the bathroom of a hotel where he was dressing up as Santa for a charity event. He’s as nice of a guy off the field as he is a monster on it.